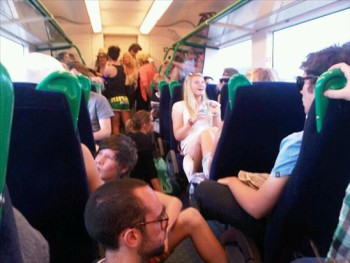 A Victorian opposition MP is claiming the safety of regional train passengers at risk because V/Line trains are breaching passenger safety load limits on every service line.

Gippsland South MLA and Deputy Premier Peter Ryan says “Matt Viney's latest false claims about passenger safety are sensationalist and highly misleading. Between October and December 2012, V/Line operated 535 trains on the Bairnsdale line, with seats available for every passenger 96.8 per cent of the time. This meant there was only a one in 31 chance that passengers would have to stand and that was only for part of the trip, such as from Dandenong to Pakenham or Garfield, because many V/Line passengers join or alight at these stops."

Mr Viney claims the Gippsland line experienced 69 breaches where there were more passengers than seats, and on 23 occasions breached the load safety limit: “These are serious safety breaches which put Gippsland passengers at risk of injury should an incident take place," he said, “we have saturation overcrowding on the V/Line network where passengers are forced to stand in aisles, sit on floors and block doorways and the Napthine government's mismanagement is to blame.”

The Deputy Premier said among the safety improvements since 2010 are axle-counter technology installed at all 32 level crossings and a permanent track grinding machine for carrying out repairs.