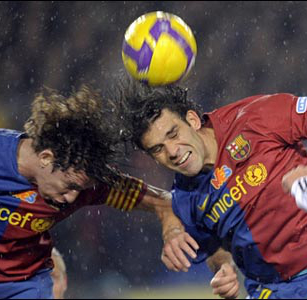 The English Football Association wants an investigation into links between former players and dementia.

It has added to concern about the impact of head injuries on former players, a push maintained by the family of former England striker Jeff Astle.

Mr Astle died in 2002, and his passing was attributed to the sport’s repeated heading of heavy, leather balls.

On a related note, a TIME Magazine article released today reports on research showing up to 40 per cent of former NFL players could have brain injuries linked to the game.

The chief medical officer of the English FA, Ian Beasley, wants FIFA, soccer's governing body, to find out if there are any definitive long-term health dangers from playing the game.

“We are taking some research questions to FIFA imminently to ask; 'Can you help us in trying to find out if dementia is more common in ex-professional footballers?’,” Beasley told UK reporters.

“The trouble is we just don't know ... it's a massive undertaking to try and decide whether there's an association between having played professional football and cognitive decline, dementia you might call it commonly - brain damage causing functional impairment over time. We just don't know.”

Beasley says research should be undertaken to assess the idea that severity of brain damage could depend on the position that the person played, the amount of games they played, and what level they played at.

“The hope is (FIFA) will tell us one way or another,” Beasley said.

“This is a health and safety issue in the end, and that's what it will come down to.

“You may still want to be a professional footballer, but at least we can advise you what the chances are of something irreversible happening to you.”

FIFA chief medical officer Jiri Dvorak said he was not aware of any specific research request by the English FA.