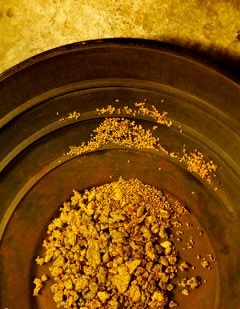 An Australian mining office Kyrgyzstan has been attacked by forces opposed to a gold-mining project.

Australian miner Manas Resources' subsidiary Z-Explorer is developing the Shambesai goldfield in southern Kyrgyzstan through its local office, but there are opponents to the progress so far.

Reports say a bulldozer on its way to the deposit was met by an angry crowd last week. The crowd confronted the driver before moving to the company's office in a nearby village. The anti-mining forces ransacked the village, looting computers and other equipment, and burning seized documents.

“They said they feared that our works could damage the environment and harm water supplies and their orchards,” according to Jyldyz Akmatova, public affairs officer for Z-Explorer

Violent riots exploded over ownership of the country's most prominent mine - the Kumtor gold deposit in the Tien Shan mountains - when protesters in the northern town of Karakol took a governor hostage and threatened to burn him alive. The official was later freed by police.

“Z-Explorer expresses its concern over this incident, in particular, over the participation of some deputies of the local council in these unlawful actions, which undermine trust in state power and have a negative impact on attracting investment,” Ms Akmatova said.

Kyrgyzstan is a nation of 5.5 million people which hosts both U.S. and Russian military air bases and lies on a drug trafficking route out of Afghanistan. It has seen two presidents deposed in bloody revolts since 2005.