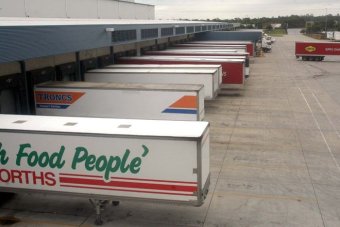 Truck drivers have accused major supermarket chains of forcing them to meet ridiculous deadlines, compromising their safety and that of other road-users too.

Several transport workers say giants such as Woolworths or Coles could have blood on their hands if they continue asking too much from truckers. Truck drivers have alleged they have been forced to work up to 18 hours a day to meet supermarket timetables in a submission to the newly formed Road Safety Remuneration Tribunal this week.

“I'm an owner-driver and I know how hard it is to say no to them when you need the work,” says truck-driver Craig Ballinger, “it's the likes of Coles who are making the industry more dangerous for everyone.”

20-year trucking veteran Bill Bihas from Oakleigh in Melbourne says: “They [Woolworths] won’t accept your load if you are 30 minutes late... you'll have 12 hours to get there, and they know that you'll not be able to sleep, but they push you."

Coles and Woolworths have rejected claims from the Transport Workers Union that they set the agenda for deliveries; the supermarkets claiming companies like Linfox and Toll are responsible for that part of the chain. The TWU has run a sustained campaign against Coles and its treatment of truck drivers since the tribunal was set up, with Coles calling it “yet another TWU stunt”.

“Coles are one of the big gorillas in road transport and they are using this economic power to squeeze the life out of truck drivers,” said TWU national secretary, Tony Sheldon.Some truckers have said it does not matter whether it is from the supermarket or their contractors, the pressure is there.

“[They say] if you're not happy with the rate we're paying you, there are plenty of others who will take it,” said driver Frank Black, “usually that comes from the prime contractor, but it's coming indirectly from the supermarkets.”

Mr Black has warned extra pressure can only lead to corner-cutting: “If you're not getting paid properly you start skimping on maintenance and tyres, you might push yourself a little but more. I really feel they put the pressure on to get the job done cheaply and so they can't afford to pay us properly either,” he said.