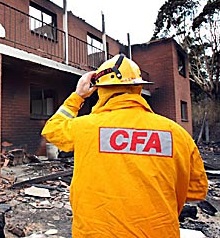 The Victorian Country Fire Authority may have some serious budgetary concerns if claims allow fire-fighters direct access to compensation for work-related cancers.

Recent reports say the CFA could be stuck with a $130 million pay-out if a Greens bill is passed allowing Victorian fire-fighters automatic be compensation for 12 work-related cancers, forcing WorkCover to escalate its unsettled scheme liabilities by about $119 million.

The figures are even bigger for the CFA - which provides compensation for volunteer fire-fighters - it would have a $1.3 billion to $1.6 billion increase in unsettled liabilities.

Victoria’s Assistant Treasurer Gordon Rich-Phillips asked WorkSafe to look into the legislation and the financial impact in October last year. The figures were estimated based on population statistics for the prevalence of cancers, adjusted to show the higher-risk experienced by fire-fighters.

Greens MP Colleen Hartland said the figures are a true reflection of the unfair burden that fire-fighters and their families carry, though she also said that she doubted the numbers. A Senate committee had concluded a flood of claims from the new law would be unlikely, and that the financial impact would be minimal. Ms Hartland said the same could be expected in Victoria.

The precedent being considered for Victoria dates back to 2011, when Greens MP Adam Bandt presented federal legislation that removed the onus of proof for Commonwealth-employed fire-fighters who acquired particular cancers. A report on the 2011 incidence of cancer in CFA Victoria is available online.