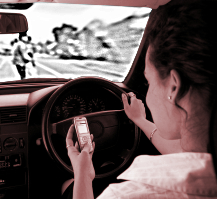 The WA Government wants to impose new maximum penalties for distracted drivers who cause fatal accidents, but some legal experts say they go too far.

Examples of careless driving could include adjusting the radio, putting on make-up, drinking, eating or even turning around to speak to passengers in the back seat.

The laws are still being drafted, and Perth barrister Linda Black from the WA Bar Association says they must be very carefully designed so as not to punish otherwise good drivers.

“Momentary inattention is a part of life - it happens on the road, it happens in a cafe when we spill our coffee on someone,” she said in an interview for the ABC.

“The thought that you could go to jail for momentary inattention is frightening.

“You're listening to the football yesterday and like me you're an Eagles fan, you get to the end of the first quarter and you turn the radio off because you don't want to listen to the radio any more, you look up - bang goes your car into another car.

“It turns out someone in the back seat isn't wearing a seatbelt and they're dead.

“The fact that your conduct may have caused an extraordinarily extreme outcome doesn't mean our laws should be dealing with you in an extremely serious way.

“What our courts should be doing is looking at your conduct - what is it that you have done and is your conduct worthy of that kind of punishment?”

Tom Davies, founder of the Enough is Enough road trauma campaign, told reporters that distraction should be punishable.

“There may not be any malice involved from the individual who caused the crash, but there has to be responsibility,” he said.

“When you're driving a vehicle there should be one thing, and one thing only that you're doing, and that is focusing on driving.”

Reports say the new legislation should be put before State Parliament this year.